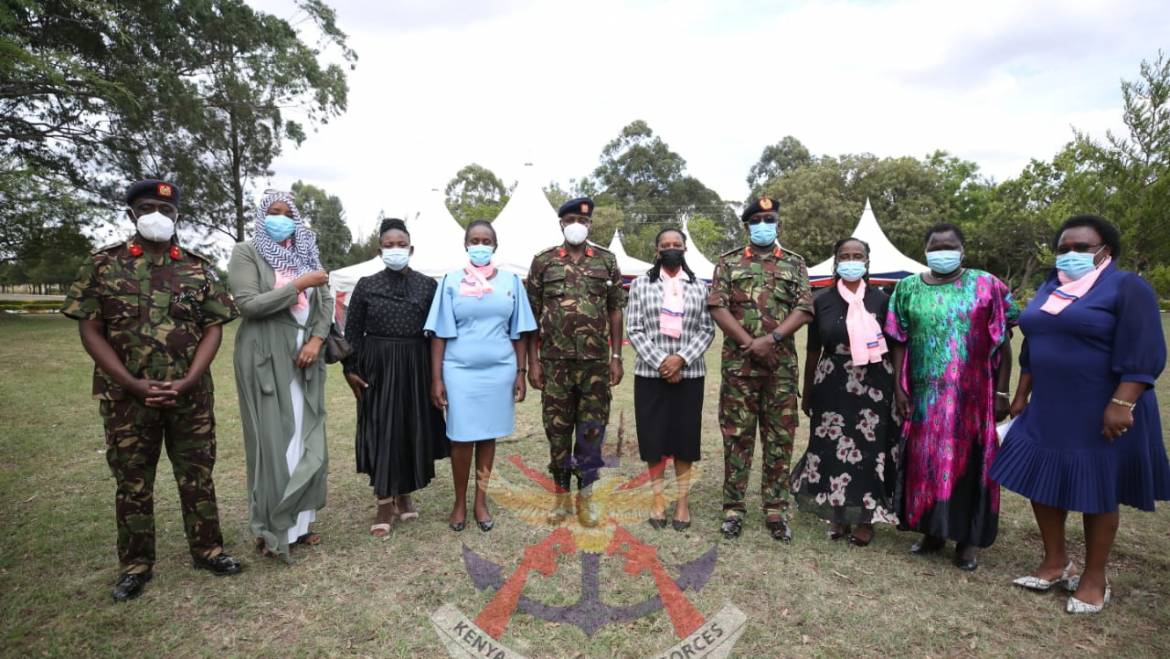 Led by the Chairperson Mrs. Tabitha Kibochi, the association donated three wheelchairs, one special classroom seat and three aid items to seven children towards reducing the burden of their care in an event graced by the Managing Director, Kenya Ordnance Factories Corporation (KOFC) Major General Solomon Manambo as the Guest of Honor.

In his address, Major General Manambo said that military service can at times be stressful to spouses and children owing to deployment of Service Personnel away from the family. He said that absence of a parent figure sometimes can affect the development of a child during pregnancy occasionally leading to birth of children with issues.

“These military wives, who are also mothers, saw it fit to establish this association to meet the needs of these category of children amongst us. MWAK is a very noble partner in complementing the KDF welfare services that has since been established across all Formations and Units,” said Major General Manambo.

He urged all commanders at various levels to educate those under their command on the importance of registering their children who are abled differently as they stand to benefit from the solid foundation that has been laid by the KDF and MWAK, emphasizing that early detection enables early correction and that disability is not inability.

MWAK Chairlady Mrs. Tabitha Kibochi expressed her gratitude to the KDF under the leadership of the Chief of the Defence Forces, General Robert Kibochi for embracing the association and its role, mentioning that this is the third handover of special equipment the association is doing since establishment.

“Through collaboration with the Director of Medical Services and the Compensation and Welfare Department, a budget to procure these devices was considered and approved. Today, it gives us immense joy to know that we have contributed as a team in alleviating some of the many challenges faced by these families. Most importantly, is the smile that we shall all have brought to the faces of these children and their care-givers,” said Mrs. Kibochi.

“Today, we are demonstrating our commitment as partners that welfare of KDF personnel and their dependants is at the forefront of our mandates. We will endeavor to continue to work together in coming up with solutions by using an all-rounded approach,” she said.

She thanked KDF for being very responsive and supportive to MWAK through the process and trust that through this partnership the association will celebrate many more milestones.

The Chief of Compensation and Welfare at the Defence Headquartes Brigadier Jeremiah Maroko said that this is the first time in the history of KDF that the Ministry of Defence has decided to procure equipment for the differently abled children, lifting the burden of purchasing such aids from parents.

“When MWAK came with such a great initiative, it lifted a burden of addressing this issue from our shoulders as the C&W is also charged with taking care of Service Personnel, a task that is enormous,” said Brigadier Maroko.

He said that MWAK exists for the sole purpose of supporting the families and not for any other gain as can be witnessed from the three events they have held (Kahawa-Nairobi, Mtongwe-Mombasa and Moi Barracks-Eldoret) towards supporting parents in taking care of these children.

The Commandant Recruits Training School Brigadier Paul Njema thanked MWAK for the noble task of ensuring the welfare of soldiers’ families is taken care off.

“It is evident that that you have a clear vision for the care of military families and we do not take this for granted,” said Brigadier Njema.

Moi Barracks Senior Medical Officer, registered his appreciation to MWAK for the support saying that society sometimes fails to notice the challenges that exist in taking care of such children. “KDF has invested a lot in health care by providing equipment and qualified personnel in an effort to ensure dependants and families get top notch services,” he added.

He thanked the parents for being bold enough to bring forward their children for support and urged them to use the aids once they receive them. He further urged expectant mothers to attend antenatal clinics early enough to facilitate a comprehensive follow through during the pregnancy period so that any issues can be detected early and corrected. 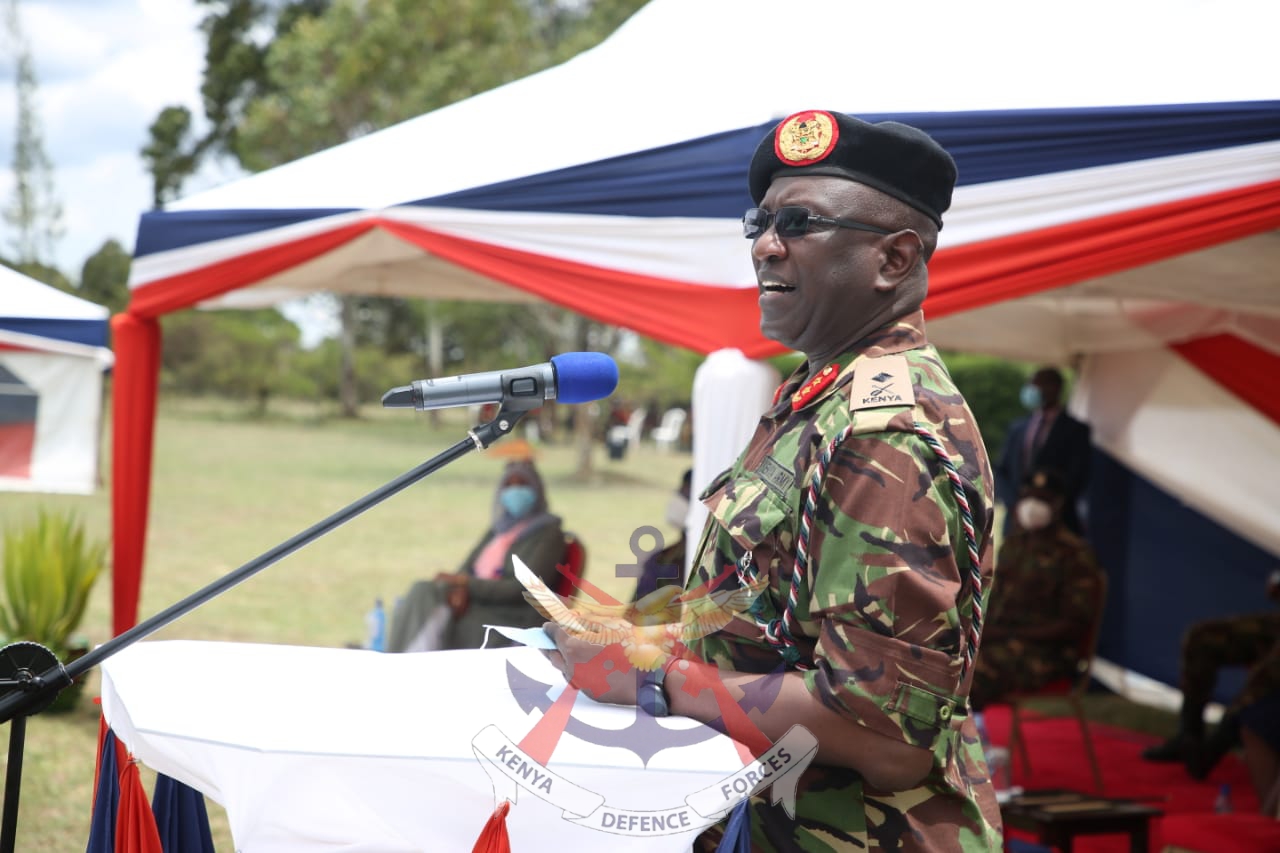 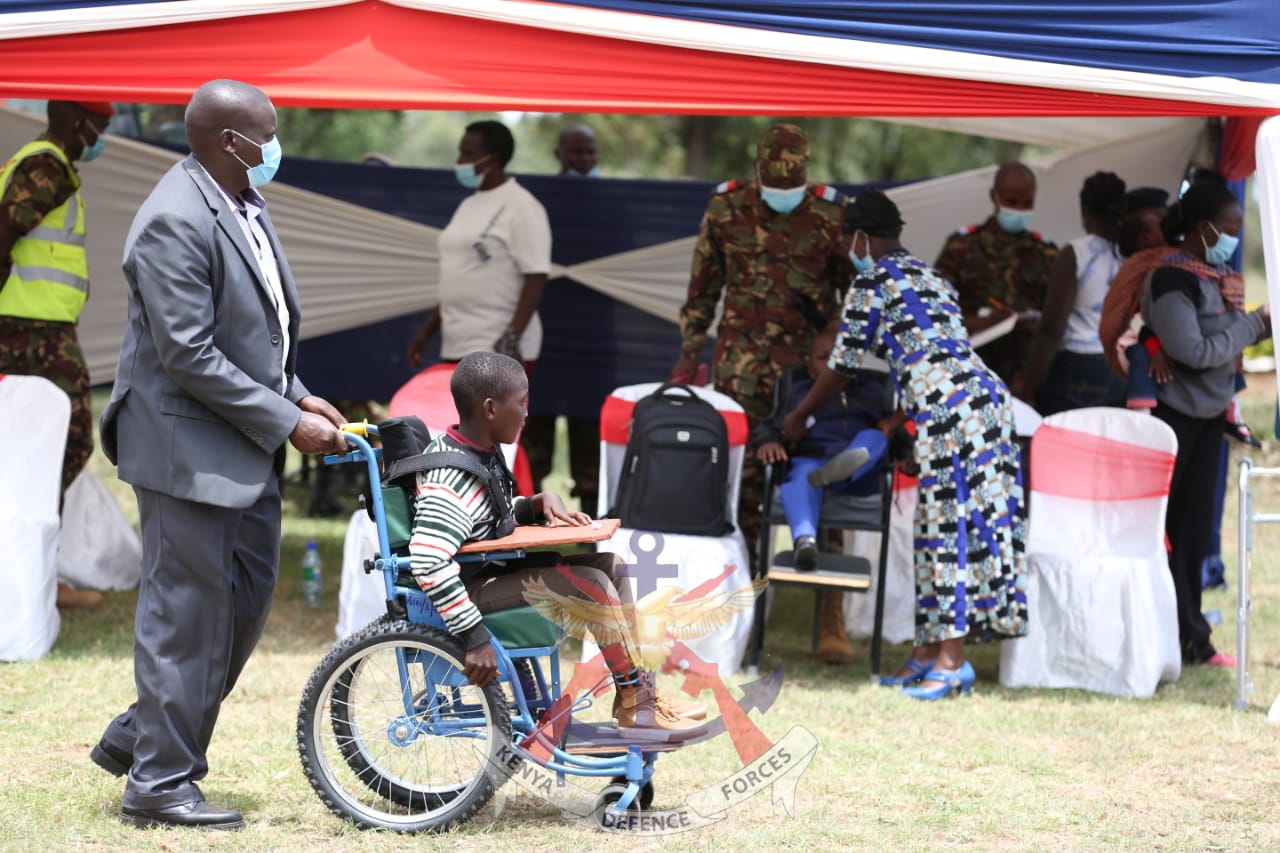 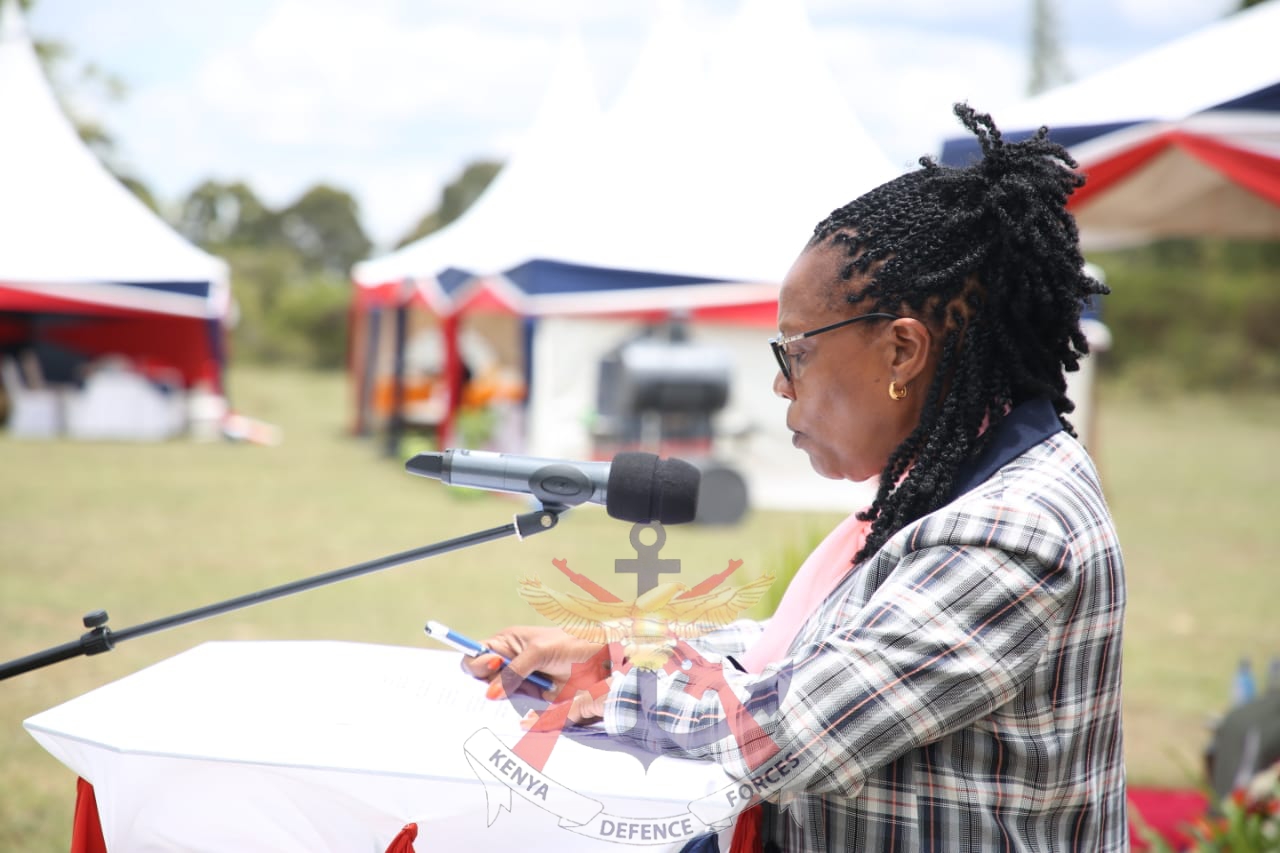 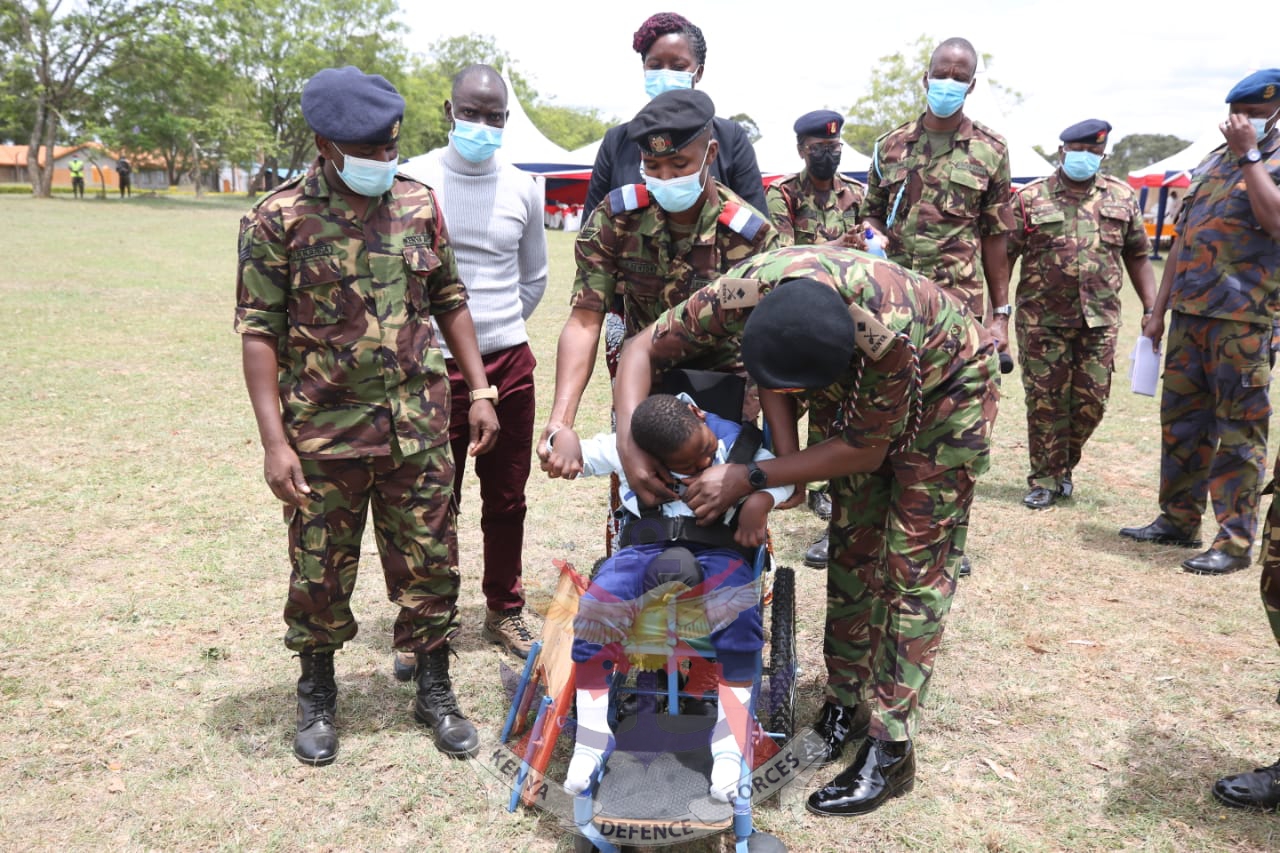 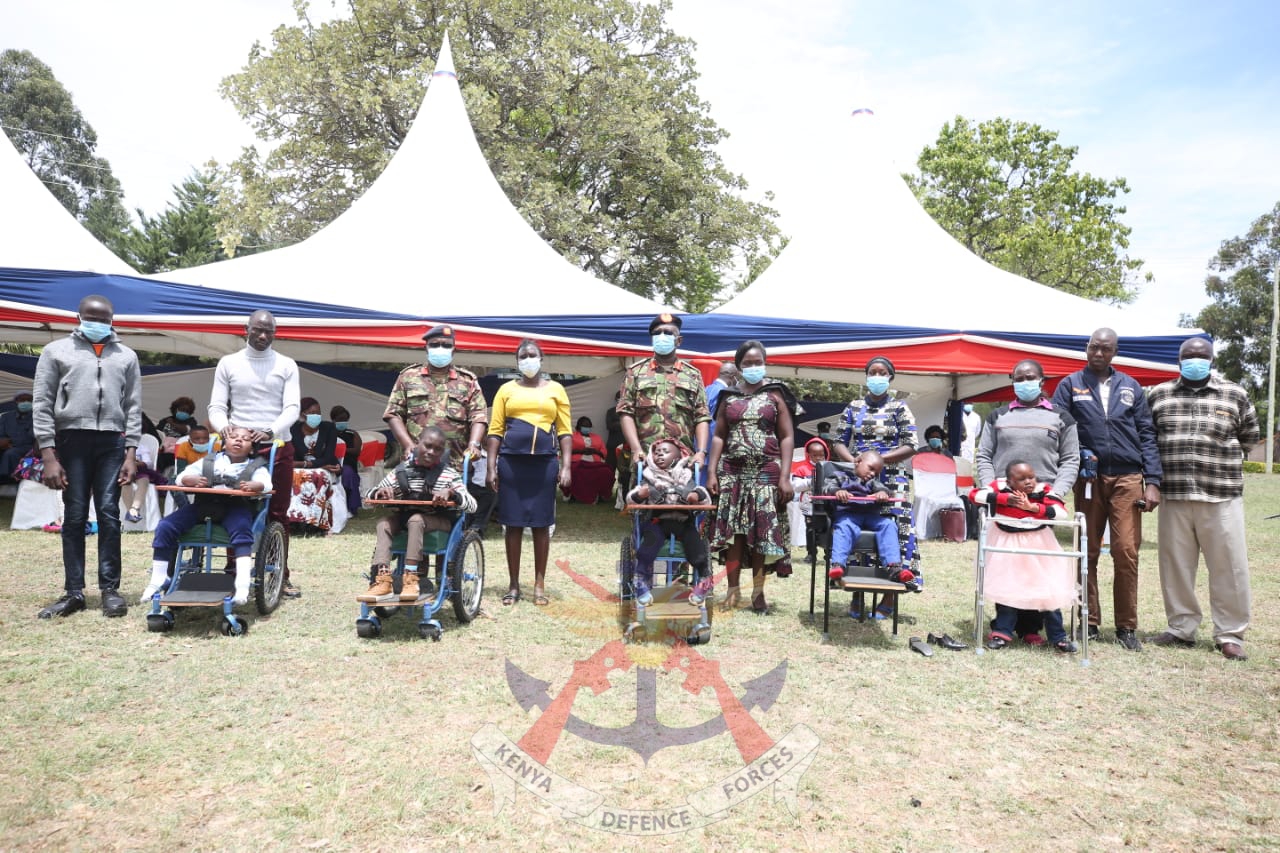 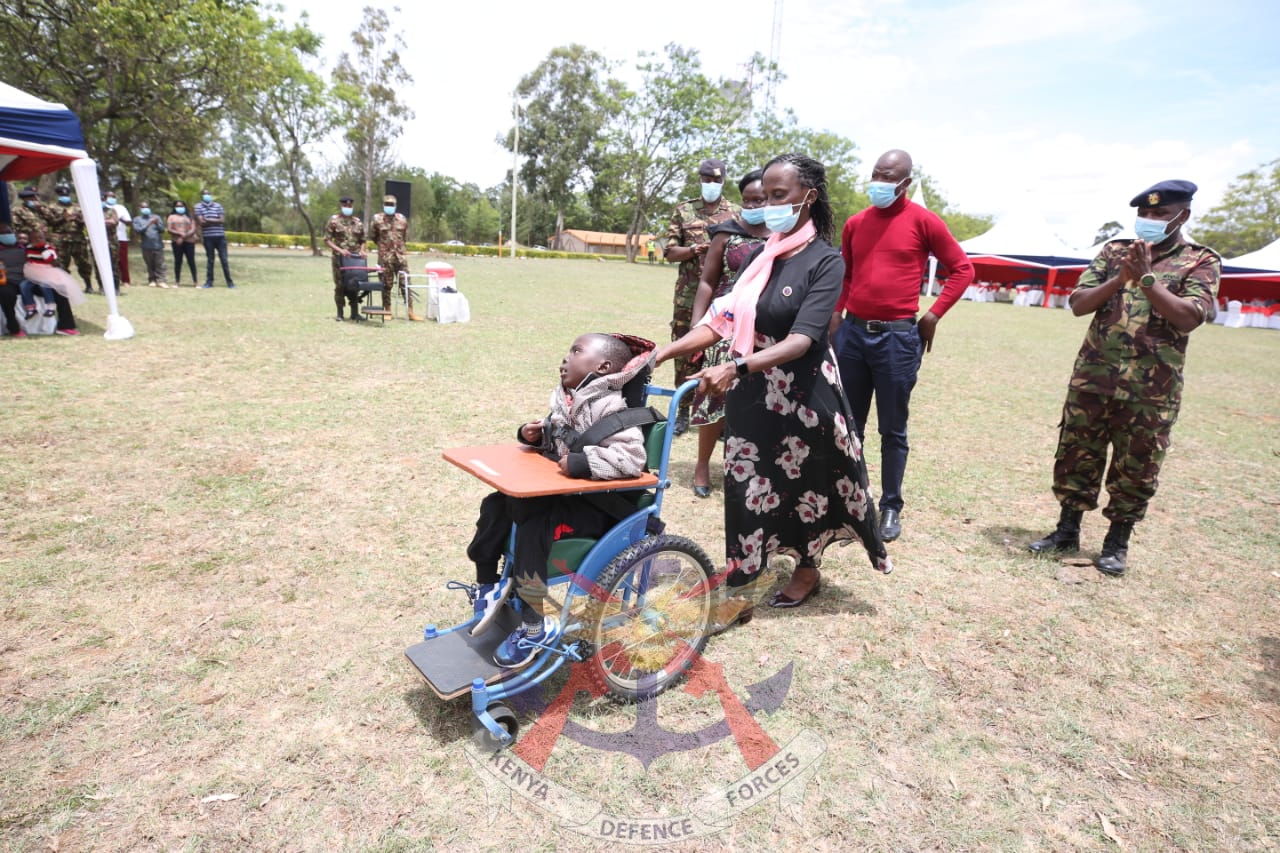 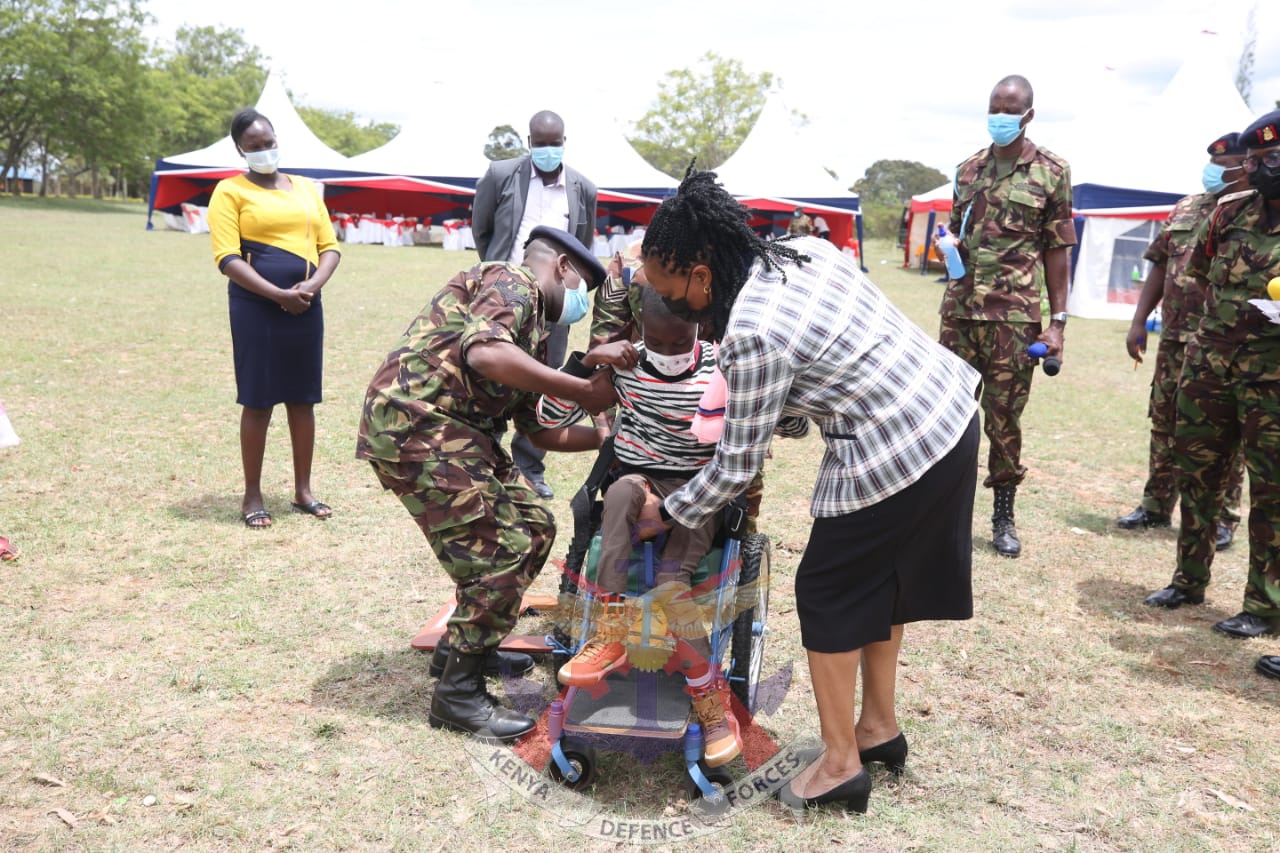 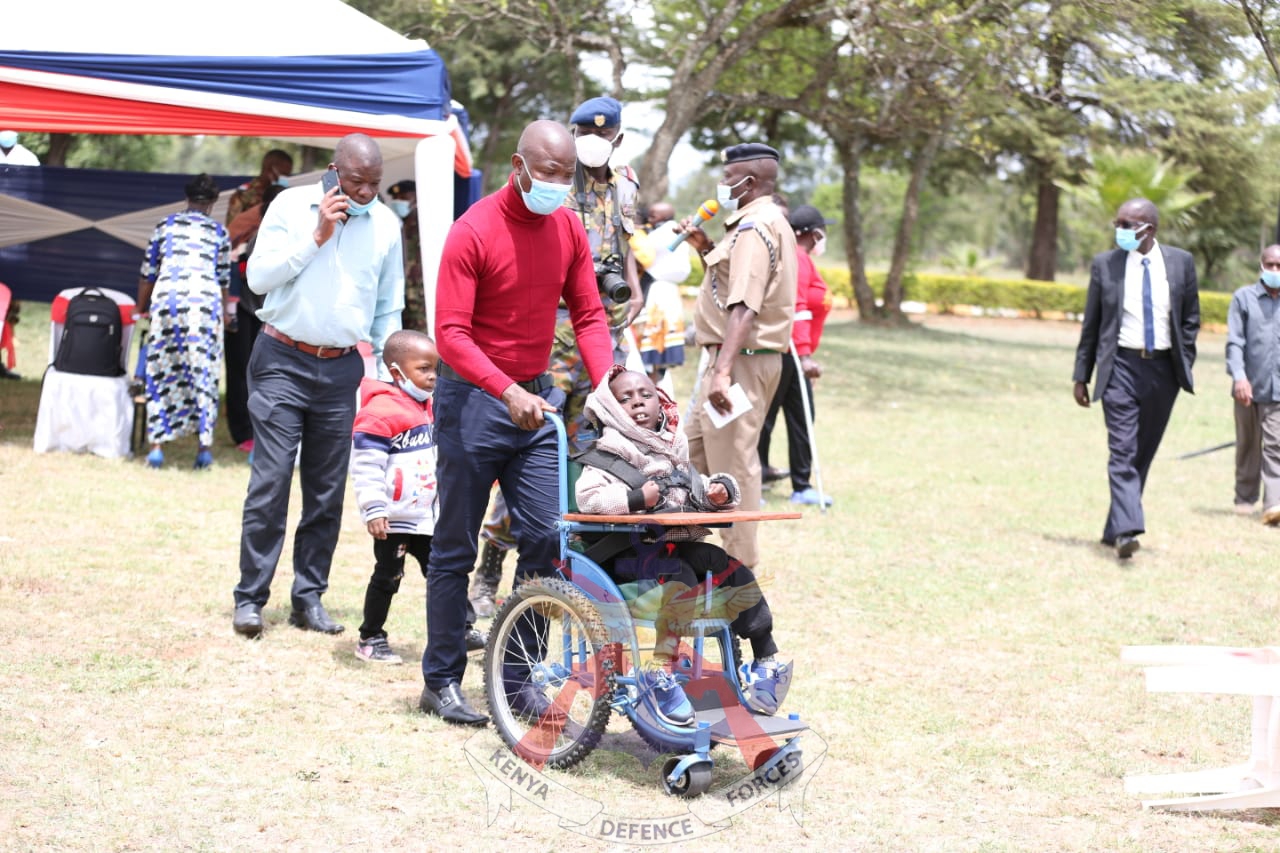