Kenya launched Operation Linda Nchi and entered into Somalia on the 14th October 2011. The purpose of this operation was to degrade the Al Qaeda – affiliated Al-Shabab Islamist group in Somalia who were posing a security challenge in Kenya, hence threatening Kenya’s security and national interest.

This decision was reached at after a series of incidents of boarder attacks and incursions by the militia group along the common border with Somalia where, Kenyan AID workers in Dadaab, a couple in Kiwayu Safari villages in Lamu and abduction of a French tourist lady were witnessed.

In light of continued threats, to the Republic, the Government of Kenya invoked article 51 of the UN Chatter in order to secure the right to self – defence from these unwarranted attacks by the militia group.

To sustain the gains made by KDF after few months in Somalia, the UN and AU invited Kenya to incorporate KDF into AMISOM in November, 2011. The troops from Kenya were later formally integrated into AMISOM on February 22, 2012 via the United Nations Security Council Resolution 2036 (2012).

Resolution 2036 expanded the AMISOM mandate by increasing the manning level from 12,731 to 17,731. Kenya’s military intervention in Somalia re-energised regional and international resolve to address the al-Shabaab’s threat to peace and security.

The revised mandate required AMISOM to establish its presence in four sectors, in coordination with local security forces, so as to reduce the al-Shabaab threat and set conditions for restoration of state authority. KDF troops were assigned to Middle Juba and Lower Juba regions that were designed as Sector 2.

To mitigate the threat posed by the Al-Shabaab to the counties of Mandera and Wajir, KDF maintained the prevailing posture in Gedo region that formed part of AMISOM Sector 3.  This measure sought to allow time for the deployment of Ethiopian troops who had been assigned to the sector.

By 2018, KDF still maintained its presence in Gedo Region due to the threat posed to Mandera County. In addition, Kismayo City and its environs had been curved out of Sector 2 to form Sector 6 that was manned by multinational troops.

Under AMISOM, KDF conducted a complex operation codenamed “Operation Sledge Hammer” that led to the capture of Kismayo City on 28th September, 2012.  The operation consisted of a two pronged assault involving an amphibious landing that was synchronized with an advance operation that was conducted by ground troops from Afmadhow.

The coordinated linkup of amphibious and ground troops, joint fires and the rapid seizure of enemy strongpoints in Kismayo and its environs affirmed the meticulous planning that preceded the operation.

The fall of Kismayo to AMISOM troops was a classic case of deception that surprised the Al-Shabaab, thereby leaving the terrorist group with no alternative but to abandon the city so as to avert complete destruction. During the overnight attack that took place at 2:00 am EAT, Kenyan Defence Forces troops used a beach landing approximately six kilometers North of Kismayo, close to the main road to Mogadishu to start the assault and claimed victory over final militant stronghold. The attack and the final liberation of the port city dealt a fatal blow to the rebels.

This was a significant accomplishment, considering that Kismayo was by then the Al-Shabaab’s economic, political and military nucleus.  Notably, “Operation Sledge Hammer” had potential to dent Kenya’s image as well as that of KDF in the event that the desired objective was not realised. However, the operation’s overwhelming success was worth the risk.

Indeed, the jubilation witnessed upon the announcement of the capture of Kismayo was inspiring and a relief to the residents of the seaport town, which immediately acquired a new lease of life, at least judging from the economic transformation that ensued.  To AMISOM and its international partners, the achievement was a crucial milestone in the fight against transnational terrorism.

The other objectives captured by KDF troops after their integration into AMISOM include Afmadhow in May 2012, Koday Port in March 2015 and Bardhere in July 2015.  Overall, the landmark battles fought by Kenyan soldiers against the al-Shabaab comprise the battles of Hoosingo, Fafadun, Miido and Koday.  This was accomplished with the support of Kenya’s air and naval forces.  For this reason, the Kenya Defence Forces inherently upholds the tenets of joint operations for shared success.

(Part of this story is excerpt from “The Soldier’s Legacy”- The Kenya Army at 55 Document, dedicated to the past, present and future Kenya Army Personnel) 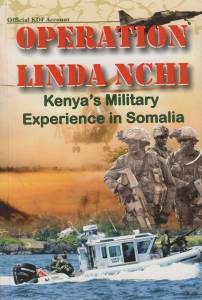