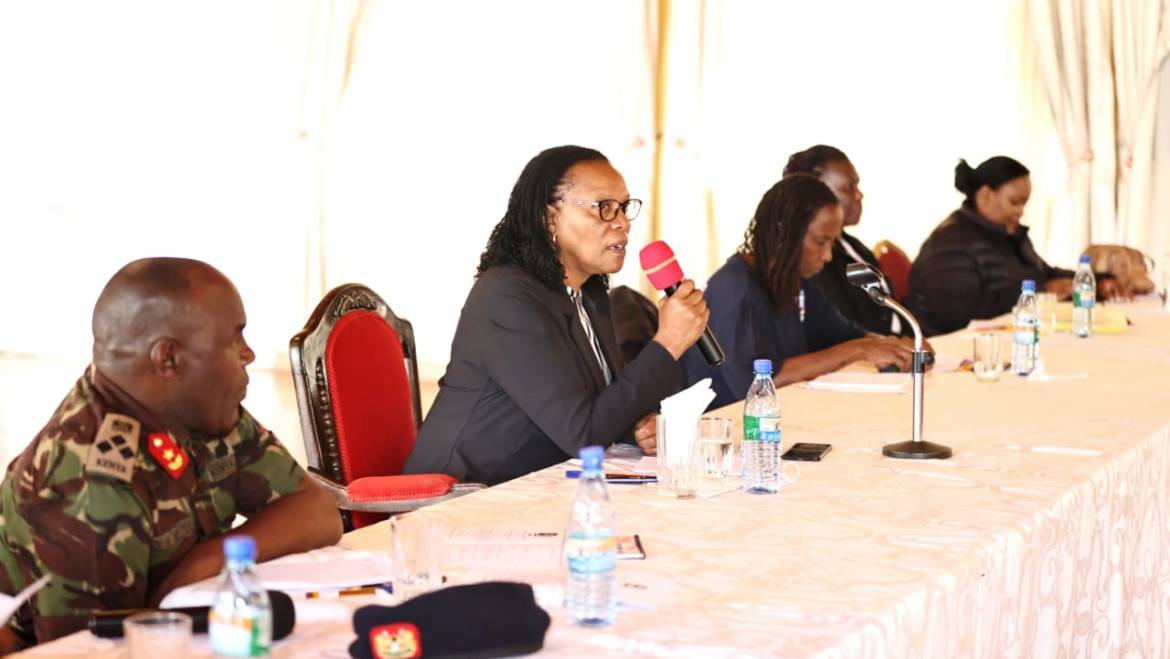 Members of the Military Wives Association of Kenya (MWAK) on the 18 November 2022 concluded a week long sensitization exercise for Commanding Officers (COs) and Officers Commanding (OCs) from various Units in Nairobi and Coast regions ahead of the anticipated enlisting of more members into the Association.

The sensitization fora targeted to create awareness and collect views from the heads of Units and establishments and share the vision of the Association as it aims at cascading its membership from the current rank of Brigadier to all cadres in the KDF.

In Nairobi, the members visited  Kahawa and Embakasi Garrisons while in the coast the team toured Kenya Navy Base Mtongwe and the Mariakani Garrison in Kilifi County.

In her addresses during the various fora, MWAK Chairperson Mrs Tabitha Kibochi underscored the vision of the Association in improving the welfare and holistic wellbeing of the KDF families among them the serving, the retired, widows and orphans.

She reiterated that the intended recruitment of more members from diversified backgrounds will propel the Association into realizing their mission by bringing together ideas and expertise from diverse sectors.

“We started by laying the structures so that we can now embark on plans of recruiting everyone in the KDF fraternity for us to walk far together. So far we’ve received tremendous support from the leadership and other Service Personnel and we hope as we spread wings, we shall experience more support,” said Mrs Kibochi.

MWAK Vice Chairperson elaborated the strategic pillars of the Association as captured in their five-year strategic plan. The pillars include housing, health, education, mentorship, veteran affairs, recreation and wellbeing. It also encompasses partnerships and financial sustainability.

The Vice Chairperson enumerated the various milestones MWAK has realized in its one year of existence among them issuing supportive devices to children abled differently within KDF families, financial empowerment programs, mentorship and capacity building programs as well as counseling for cadets, recruits and students from KDF-sponsored schools among others.

The Chief of Compensation and Welfare (C&W) Brigadier John Khaoya urged the Kenya Navy personnel to motivate their spouses to join the association since it is the biggest ally when dealing with welfare.

“There are only two pillars of a Commander’s role which are the accomplishment of a mission and the welfare of his personnel. The latter is where MWAK comes in, ” he advised.

MWAK members visited the KN primary school where they donated 214 chairs and 54 desks to the Early Childhood Education pupils at the institution.

The team wrapped up their activities with a pre-deployment counseling to the KN sailors heading to Somalia for peacekeeping duties under the African Union Transition Mission in Somali(ATMIS).

Addressing the sailors, Mrs. Roselyne Wesonga, a MWAK member presented the Maslow’s hierarchy of needs which focuses on the five stages of human development which include the physiological, safety,  love and belonging.

She advised the sailors to ensure they have a step-by-step fulfillment of the stages to grow the welfare of their families.

She urged the sailors to be in constant communication with their spouses, take care of their mental health by seeking support when necessary and involve their spouses in their financial management.

“Your wives and families will depend on you even when you are deployed. Support them financially to make sure that the homes run well even in your absence. Ensure that you support them emotionally and financially during you’re your of duty,” said Mrs Wesonga.

Brigadier Khaoya urged the sailors to formulate their wills so that their families are adequately and quickly compensated in case of any adverse eventuality.

He implored the sailors to be responsible and make good use of their finances by making worthy investments and income generating activities.

MWAK members visited the KN primary school where they donated 214 chairs and 54 desks to the Early Childhood Education department. 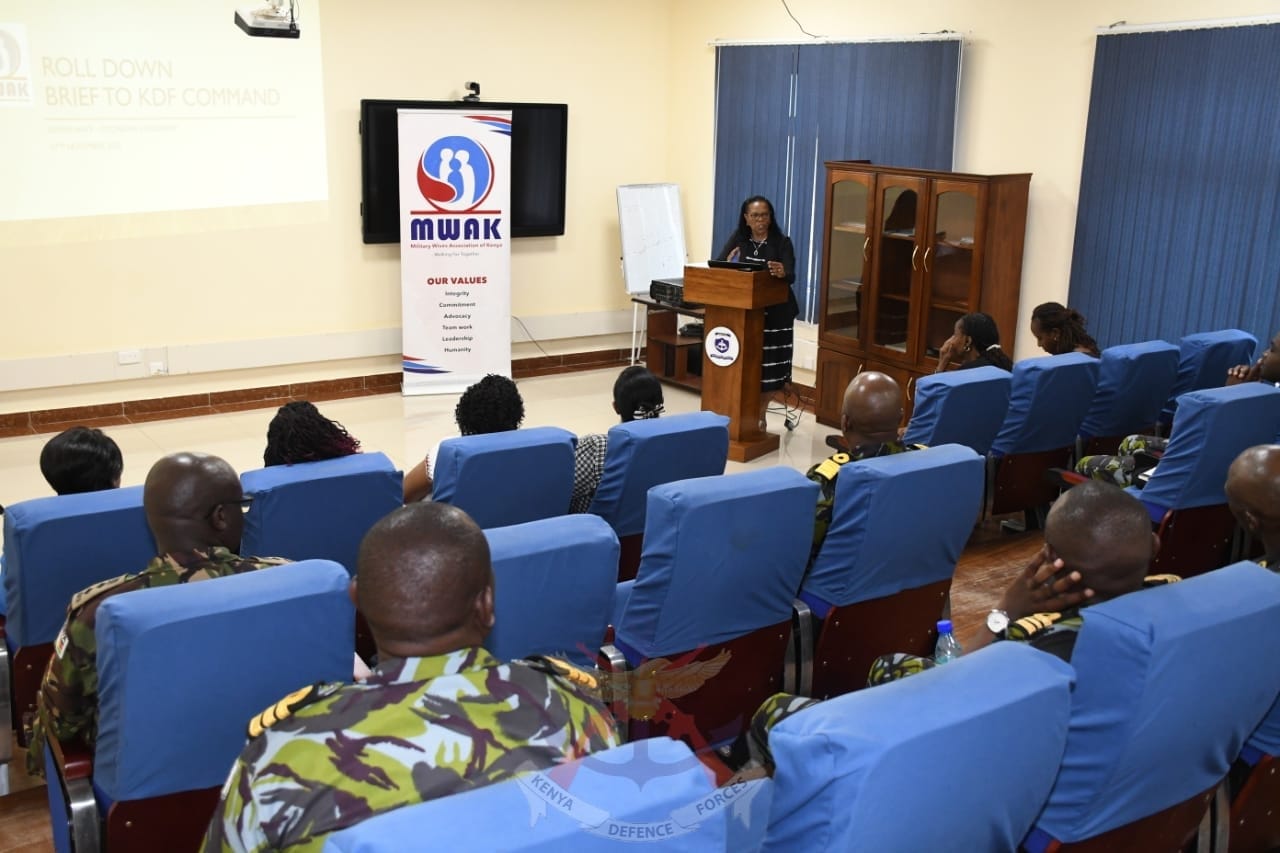 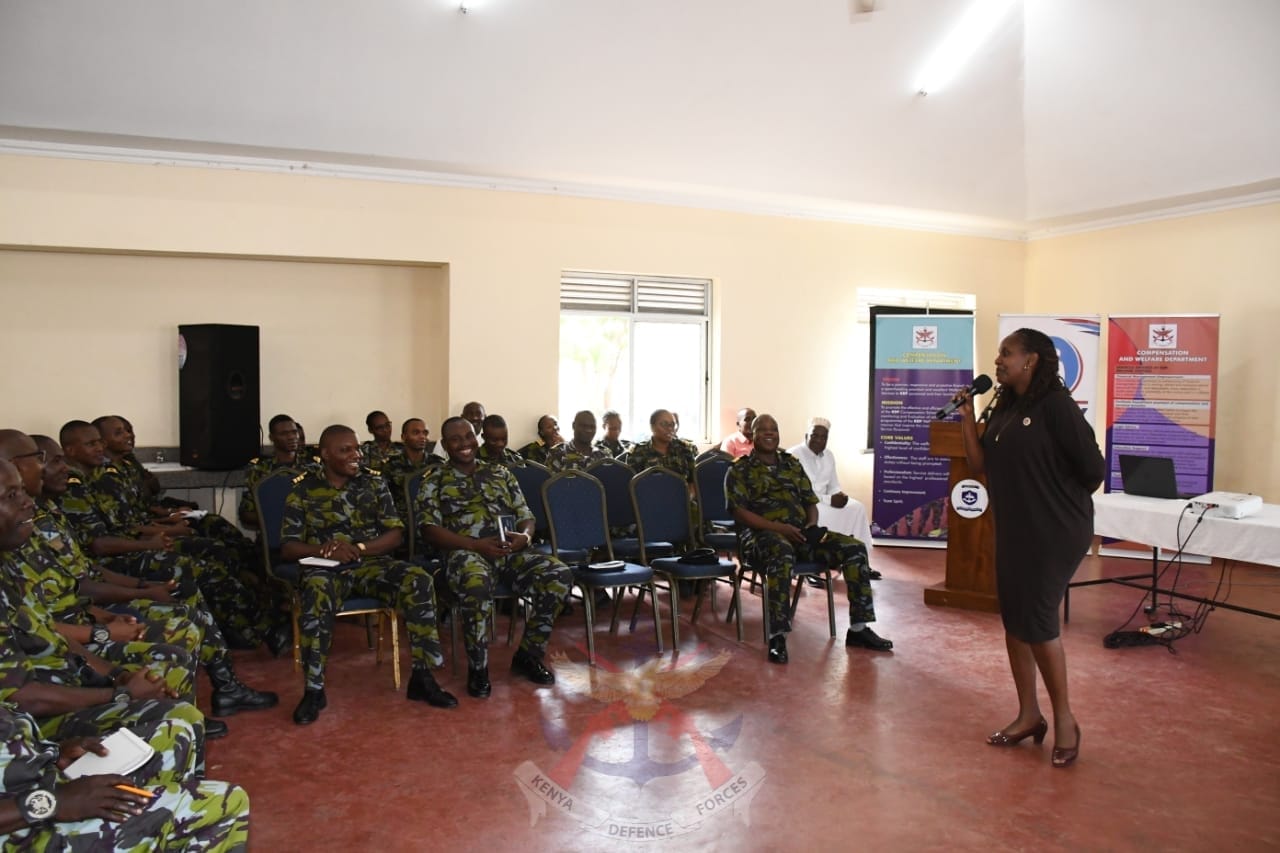 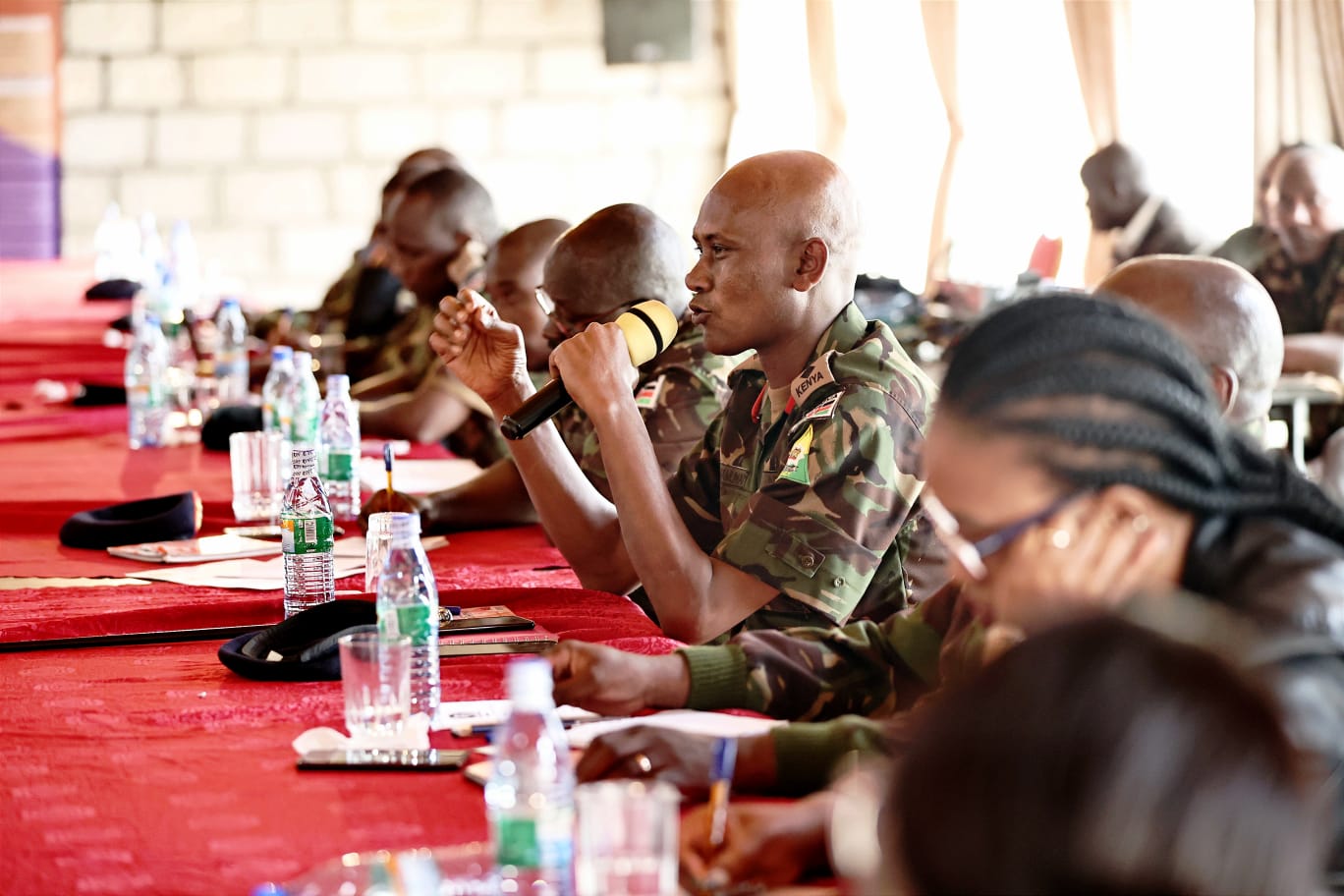 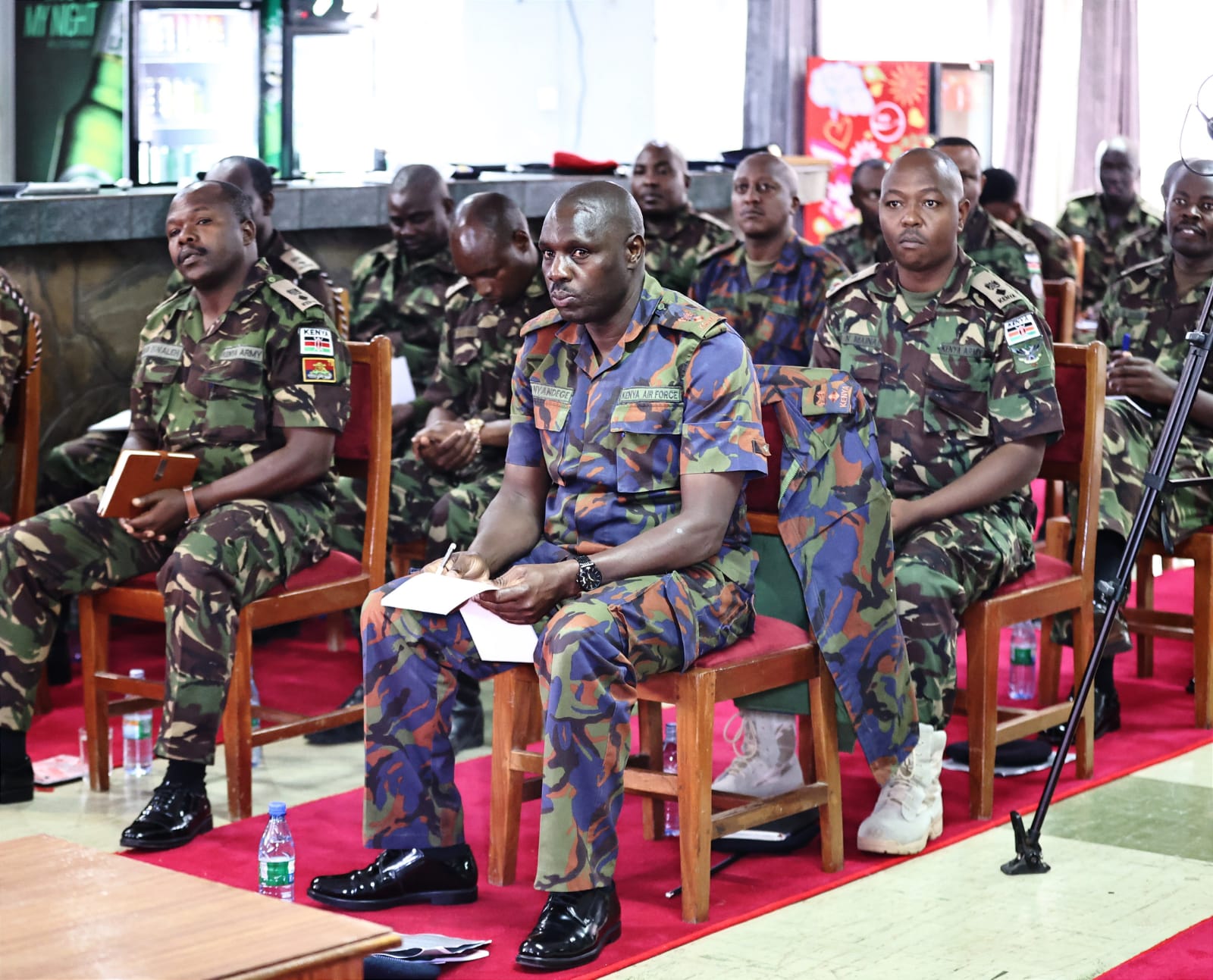 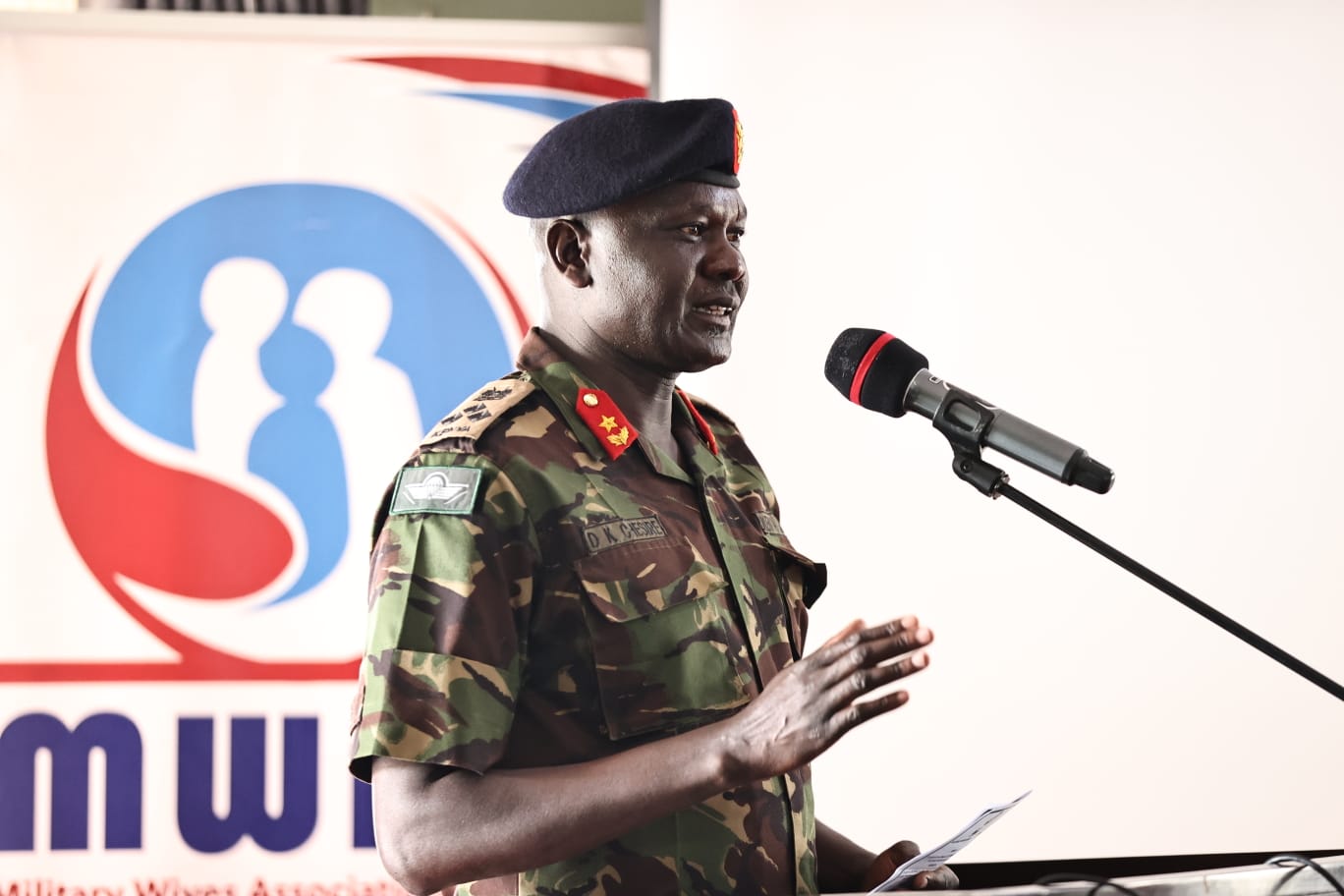 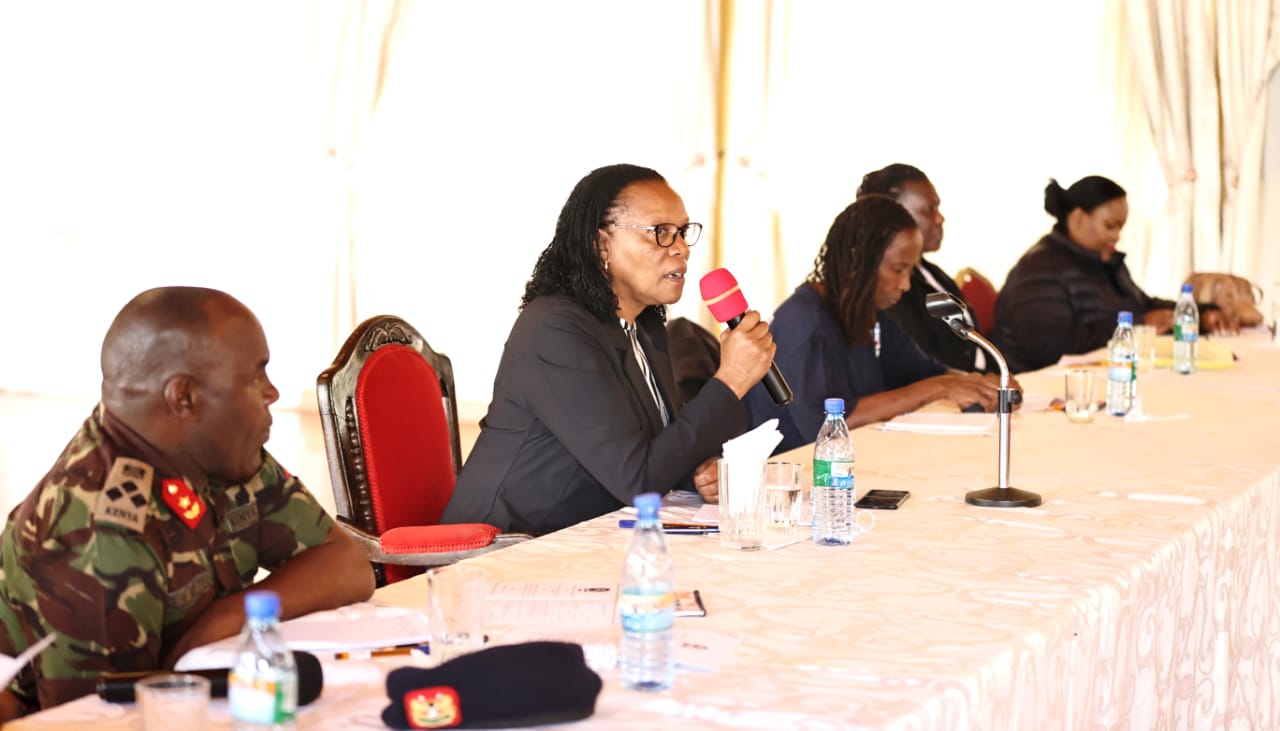