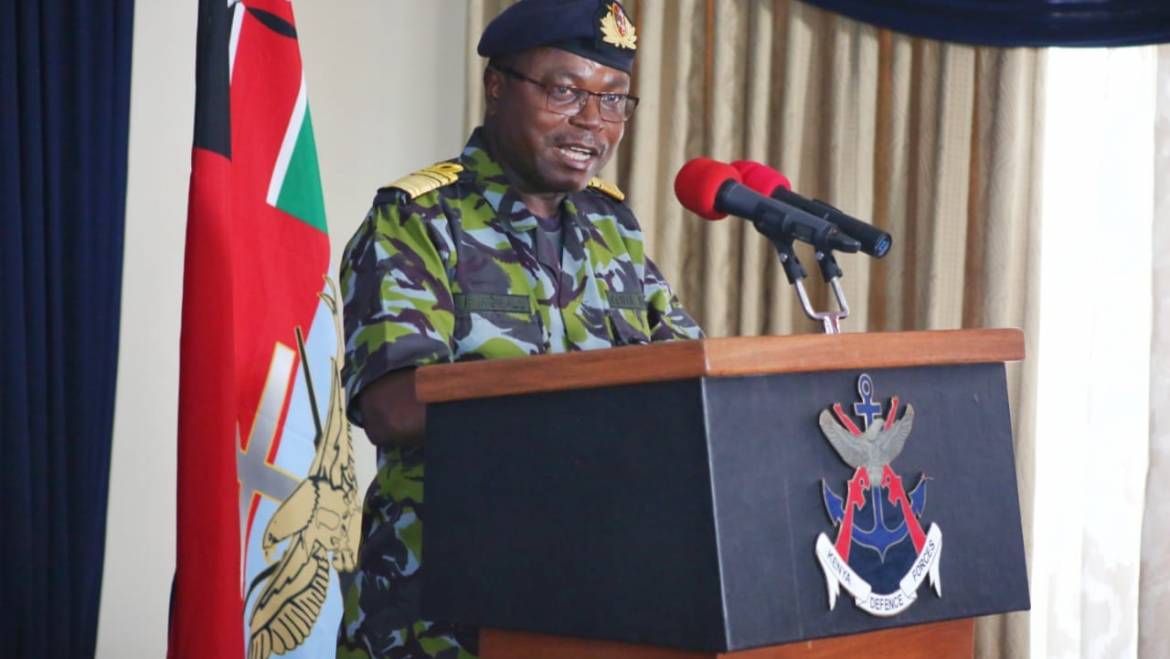 February 22, 2021 in Latest news, News, News Releases 5871 1 0
The Vice Chief of the Kenya Defence Forces (VCDF) Lieutenant General Franklin Levi Mghalu on Friday, 19 February 2021 declared the Kenya Defence Forces (KDF) nationwide recruitment exercise officially closed.
While addressing the press at the Defence Headquarters, the VCDF said that the recruitment exercise was successful where 150 General Service Officer (GSO) Cadets, 150 GSO Cadets undergraduate degree holders, 3,550 General Duty Recruits and 150 Defence Forces Constables were recruited across all the 47 counties.
He noted that the number of female recruits increased to 12 percent up from 11 percent the previous year as KDF continue championing for gender balance.
He said that GSO Cadets and GSO undergraduate degree holder Cadets will report for their training at the Kenya Military Academy in Lanet, Nakuru while the General Duty Recruits will report to Recruits Training School in Eldoret in batches at dates indicated on their calling letters.
“Those reporting to KMA and RTS are those who received official calling letters from Recruiting Officers at the advertised recruiting centers. Anybody presenting themselves with letters from any other sources will be arrested and prosecuted accordingly,” warned the VCDF.
He added that the names of successful Specialist Officer Cadets and Tradesmen/women will be published in the local dailies from 22 – 25 February with information on the interview centers.
“Successful Specialist Officer Cadets and Tradesmen/women will be notified when they will report at the Kenya Military Academy and Recruits Training School respectively at the interview centres. Successful Constables will report at Kahawa Garrison, Nairobi.” He added.
Lt Gen Mghalu said that all successful candidates will be expected to present original documents for further verification and that they will undergo medical examination in their respective training centers before and during the training period.
He said that oversight bodies were invited to observe and report on the conduct of the exercise nationwide, noting that 12 cases of malpractice among civilians and military personnel have so far been reported and remedial action is currently underway.
“To deter and mitigate corruption malpractices, KDF has continued to sensitize the public of conmen/women masquerading as military officers purporting to have influence or connections with KDF to sway the outcome. Corruption can only be defeated if, we do not give bribes, take bribes or ask for bribes,” he said.
Lt Gen Mghalu said that during the recruitment exercise, several candidates were turned away after toxicological tests showed they are under the influence of banned drugs and substances.
Presesent during the press conference were the Assistant Chief of Defence Forces Maj Gen Fatuma Ahmed, Chief of Personnel Brig Maroa Gati, Chief Recruiting Officer Brig Peter Muteti, among other senior military officers.
Here is the full statement by the VCDF https://bit.ly/2Zwlo5d
Share: