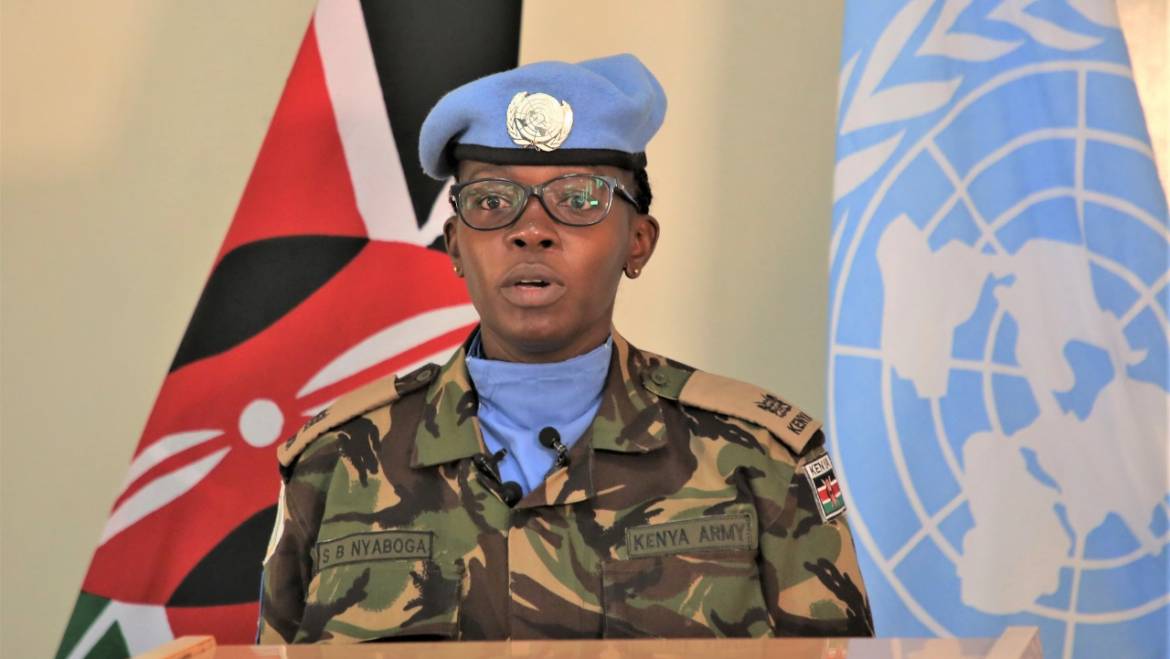 A Kenyan peacekeeper, who recently completed her assignment in Darfur, Sudan is selected to receive the 2020 United Nations Military Gender Advocate of the Year Award.

Military Gender Advisor Steplyne Nyaboga, 32, who served in the recently ended United Nations – African Hybrid Union Operation in Darfur (UNAMID), will receive the award during a virtual ceremony presided over by Secretary-General António Guterres, marking the International Day of UN Peacekeepers on Thursday, 27 May 2021.

Created in 2016, the United Nations “Military Gender Advocate of the Year Award” recognizes the dedication and efforts of an individual military peacekeeper in promoting the principles of UN Security Resolution 1325 on Women, Peace and Security in a peace operation context, as nominated by Heads and Force Commanders of UN peace operations.

Upon receiving the award, Major Nyaboga expressed happiness that her work in mainstreaming gender dimensions was recognized. Reflecting on her role as a peacekeeper, she says: “I am so elated that our efforts in serving humanity have impact and didn’t go unnoticed.

Peacekeeping is a human enterprise: placing women and girls at the center of our efforts and concerns will help us better protect civilians and build a more sustainable peace.”

Major Nyaboga deployed to the UNAMID mission in February 2019.

Throughout her two-year deployment in Zalingei, she worked diligently to mainstream gender in military components by bringing awareness to gender dynamics in the fieldfield.

Major Nyaboga specifically encouraged gender-sensitive outreach to local communities, in an effort to enhance the protection of civilians.

She also focused on gender training for her fellow military peacekeepers, training nearly 95 per cent of the UNAMID’s military contingent by December 2020.

She also advised the Force on how to better identify and integrate the needs of men, women, boys and girls groups in vulnerable contexts into UNAMID’s analysis, planning and operations, a move that greatly improved the mission’s understanding of and response to protection needs.

“Peace and security can only be achieved and sustained if all members of society have equal opportunities, protection, access to resources and services and can participate in decision-making,” he said.

“Through her efforts, Major Nyaboga introduced new perspectives and increased awareness of crucial gender dimensions across the Mission and helped strengthen our engagement with Darfuri women.

The United Nations remains steadfast in its commitment to ensuring that women sit at the political table and make their full contributions to peace, and Major Nyaboga’s dedication has advanced the vital clause,” he added.

This is the first time that a Kenyan peacekeeper has received this prestigious award.