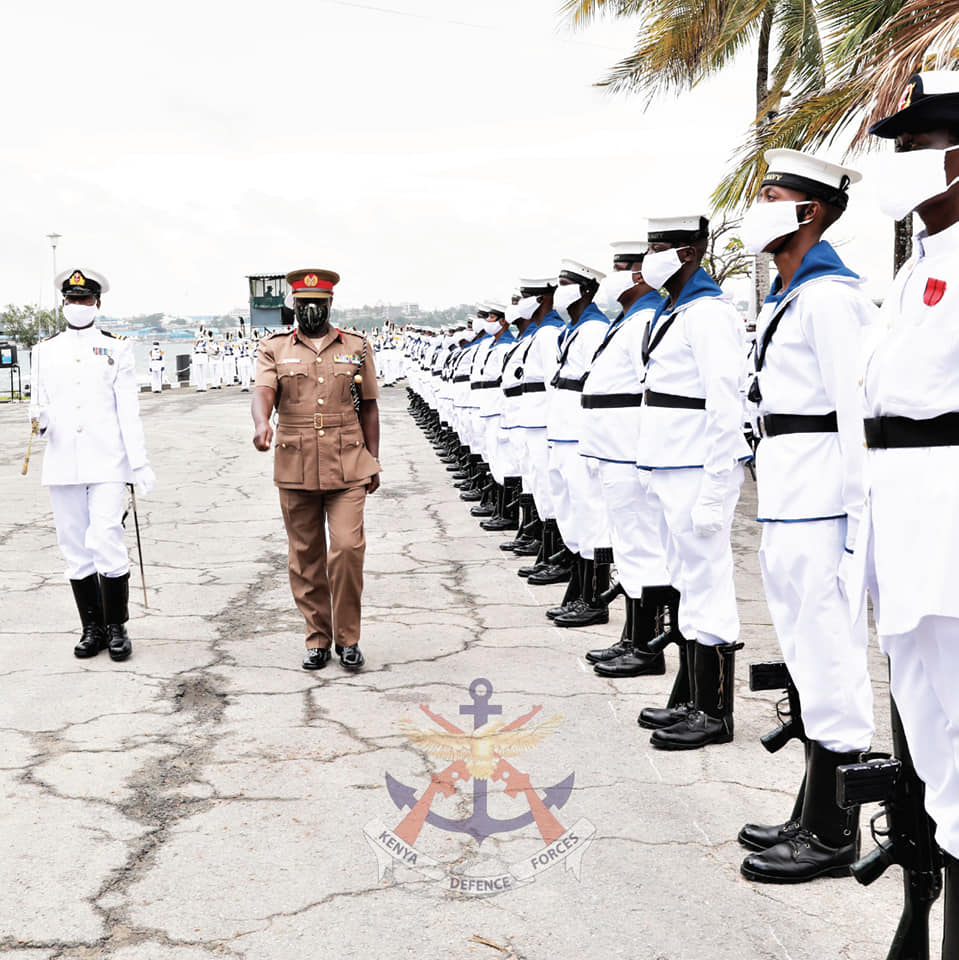 The CDF was briefed on the organisation, roles and capabilities of the Kenya Navy at the Kenya Navy Training College where he was also taken on a tour of the Full Mission Bridge Simulator.

Other areas toured include; Kenya Navy Fleet Mkunguni where the CDF was briefed on the various classes of ships and water crafts operated by the Kenya Navy, he also toured the dockyard where the Kenya Navy Slipway is currently being built. The 4 tonne Slipway at 70 % completion rate is one of the flagship projects under the Blue Economy sector and is expected to be opened in June 2021.

In his address to sailors at Lt Col Kimaro Stadium, the CDF commended the Kenya Navy for upholding professionalism in safeguarding Kenya’s maritime sovereignty and territorial integrity.

“Kenya Navy has contributed a lot to the National Development Agenda. Just recently you revived MV Uhuru in Kisumu in record time and at very minimal cost and currently it is serving the East African region on Lake Victoria, “ said the CDF.

“The Clearance Diving Unit and the Special Boats Unit have been instrumental in search and rescue missions across the Likoni Channel,” added the CDF.

General Kibochi further emphasized that Kenya Navy has been involved in various operations in and out of the country including Operation Linda Nchi, AMISOM, Operation Maliza Ugaidi, Operation Fagia Msitu, Operation Linda Bahari and support to the Kenya Coast Guard Services and the Fisheries Department.

The CDF also shared his vision with the sailors which include mission readiness through enhanced joint training as well as adoption of an appropriate defence posture. He informed the navy sailors that he will prioritize equipping them well and providing other support to ensure mission readiness.

On welfare matters, he informed the sailors that plans are underway to construct six regional hospitals, including in Mtongwe and Manda, as a comprehensive system to address health issues.

In his conclusion, the CDF urged the Kenya Navy to continue enhancing performance of both its primary mandate as well as support to national government and civil authorities.

Commander Kenya Navy informed the CDF of the Navy’s mission readiness geared toward delivery of tasks as assigned by the Defence Headquarters. He also thanked the CDF for the support the navy has been receiving operation wise and in welfare, noting the various ongoing modernisation projects in Mtongwe and Manda.